Lately I installed my first DAG with Exchange 2016 CU3 in productive environment. In the beginning it went really smoothly. But after all databases have been created, I realized that databases got bounced around the nodes and a lot of errors in the Event Log like these:

The servers were just fresh installed with no mailbox on it. The layout is as follows:

As I have never seen a behaviour like this before, I opened a PSS case and started digging into the issue in parallel. After a while, I was able to see a pattern. 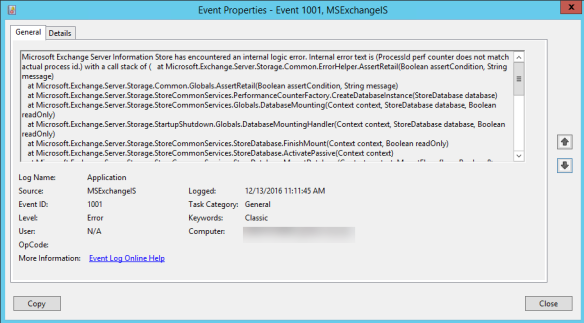 followed by an unhandled exception 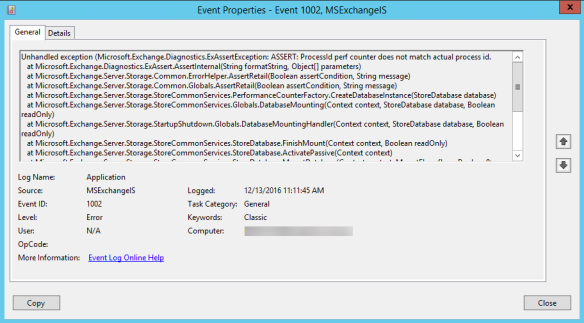 which ended in a Watson report 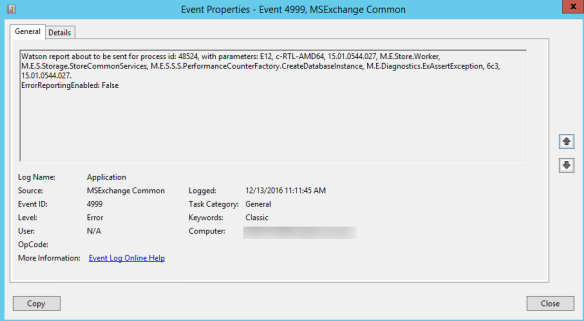 This ended all in having the feature “ReadFromPassive” quarantined

As we couldn’t figure out what’s going on and our EE also had no hints, we decided to upgrade to Exchange 2016 CU4. We were hoping that a potential issue was already fixed in the latest version. Sadly this did not fix our issue.

After a while we finally found the root cause for the unhandled exception, which caused the store worker processes to crash. You need to have a closer look at a previous shown event: 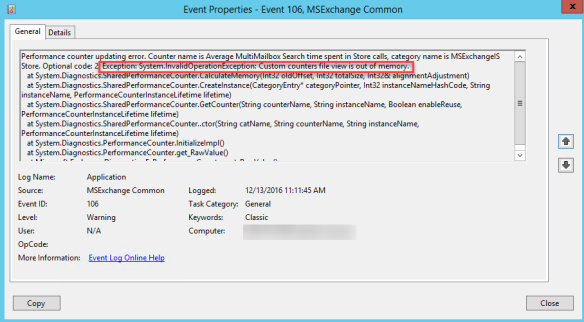 Various performance counter could not be initialized as the allocated memory was not enough, which caused the store worker processes to crash.

You can read more about how FileMappingSize works here, but the main statement is the following:

Now that we’ve found the root cause we need to fix it by increasing the memory for the affected performance counters. There is no way, at least we couldn’t find one, to calculate the needed value. It just depends on your environment. In my environment the following needed to be tweaked:

As there are several methodes to do so, I listed those:

Like Exchange is doing this during setup. For this you need to load the PSSnapin Microsoft.Exchange.Management.PowerShell.Setup:

Edit the Registry for the specific counters. A hint for this could be found in the previous mentioned article:

“For the size of separate shared memory, the DWORD FileMappingSize value in the registry key HKEY_LOCAL_MACHINE\SYSTEM\CurrentControlSet\Services\<category name>\Performance is referenced first…”

Edit the Machine.config file and increase the default value from 524288 to the desired one, like described here.

Note: This will increase the default value for ALL performance counters, which might cause other issues!

We decided to edit the Registry as we are using Desired State Configuration and this needed the least administrative effort.

We asked to have the setup changed to get for these performance counters increased as the setup is doing this already for some others. When you parse an ExchangeSetup log you will see that Exchange is already increasing memory for a few counters. Sometimes Registry is edited and sometimes PSSnapin is used. If you run into such an issue and you modified FileMappingSize, keep this in mind, when you try to solved EventID 106 like described in this KB:

I know that I might run into a corner case, but I hope this helps someone. Just in case…

6 thoughts on “Exchange 2016 and FileMappingSize”