I was just made aware of a HP specific setting which has a huge impact on performance. But before you start panic, have a look at the conditions:

If you’re not matching these conditions, you can stop reading and relax. If not….you might want to continue reading.

As mentioned before it affects not only Exchange. Credit goes to Nicholas, who highlighted the following KB for Lync/SfB:

Another PFE made me aware that the script HealthChecker.ps1 is checking the setting by comparing the values EnvProcessorCount and NumberOfLogicalProcessors

This is something, which is not really obvious. When you check running processes, you will realize that most of them will utilize only half or less of the logical processors.

Thus means only parts of your CPU resources are used at all and this affects the overall performance of applications.

HP published already in year 2015 an advisory about this issue:

The default setting is Clustered, which basically leads to the fact that Windows will create for each physical processor a processor group.

In my case there are Proliant Gen9 server, with 2 physical CPUs, 12 cores each. Thus means in my scenario, we will have 2 processor groups. This is by default not an issue, but by default an application is limited to a single group and therefore will see and use ONLY one group. There needs to be code added in order to support multiple groups.

What is the difference?

You can see the difference by changing the graph for the CPU utilization in the Task Manager.

The following shows when NUMA group Optimization is set to Clustered: 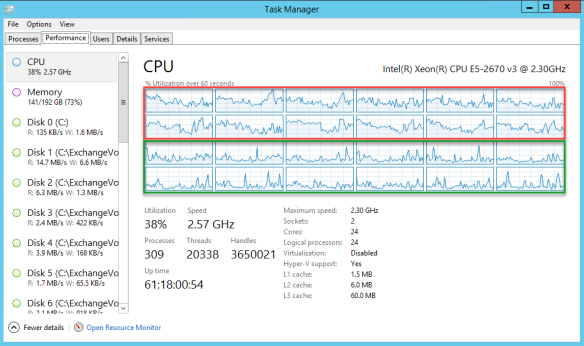 Same as above with graph set to NUMA nodes

And here when set to Flat: 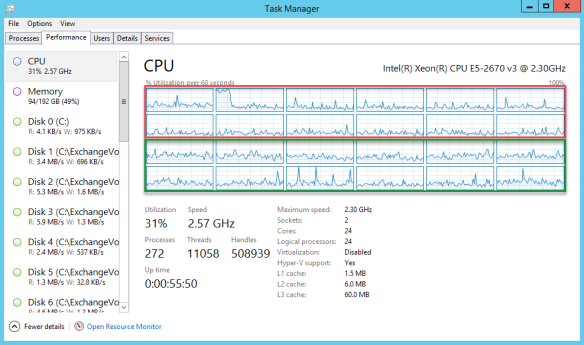 Same view as above with NUMA group Optimization set to FLAT. You can see the more even utilization of cores. 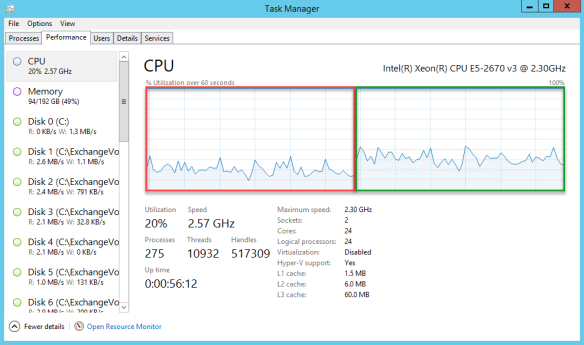 Same as above with graph set to NUMA nodes

How and what to check

There are several ways to check whether you’re affected or not. Here are some examples:

You can try to Set affinity with the Task Manager 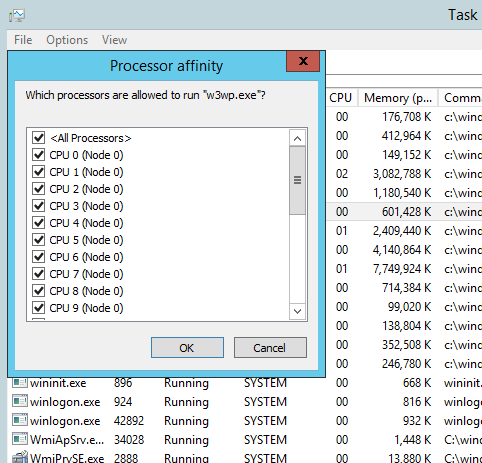 When you group by ProcessorAffinity and have processes with a value of 0, means these processes are bound to processor group 0:

16 processes running with ProcessorAffinity 0, which means only on processor group 0

You can identify the maximum ProcessorAffinity by the following command (credit goes to BarryCWT and his script):

To identify the processes, which would take advantage of this configuration you can query for all processes with a ProcessorAffinity set to 0 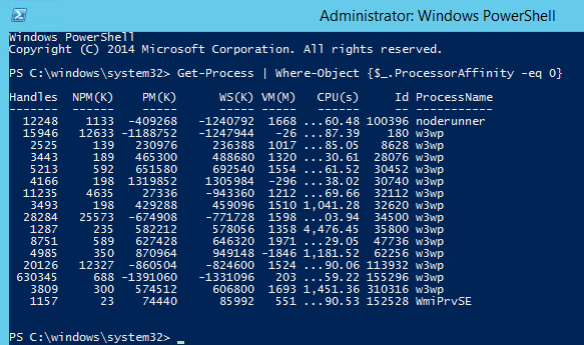 As you can see all IIS worker and, especially interesting, noderunner. Why interesting? When you look at the CommandLine of this process, you will see it’s the one. which is responsible for Exchange Index and anyways is very CPU hungry

There is an easy fix available, which solves the issue described above. I’m only wondering why this fact isn’t as popular as it should be. On one side it’s really not a good idea from HP to foul by default the OS, on the other side I’ve found some evidence that Microsoft was aware of this issue, at least for CLR:

Either way, you as the end-user are affected and this doesn’t affect only Exchange. We have seen same behaviour on other systems not running Exchange and changing the settings gave us here also a performance boost.

Looking back across the last 2 years, I’m convinced that a few support calls and CritSit could have been avoided.

I hope this information helps you to avoid unnecessary support calls and a smooth upgrade to the latest Exchange version or just more performance for any other application.